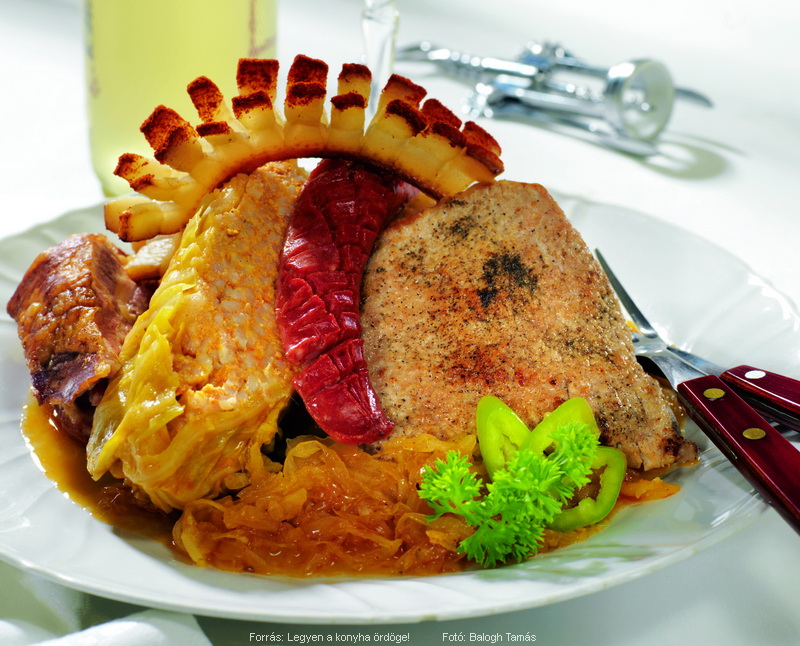 Soak the smoked ribs in cold water a few hours. Bring 2 cup water to boil, pour in the rice and
cook, covered, until soft, but it is all right if it is not cooked completely. Cut 4 slices from the bacon, each about the thickness of your finger. Cut into the meat up to the rind about every 3/4”/1 cm apart, put aside until ready to serve. This will become the cock’s comb. Dice the rest into small cubes, toss into a pot, pour in 2 tablespoon oil, and start to brown it.
Meanwhile, chop the onions fine and wilt it by tossing it on top of the bacon, which should be getting crunchy. Set aside. Combine the ground meat with the cooled rice and egg. Add about 1 teaspoon salt, pepper, paprika, marjoram, and season with half the crushed garlic. Fill the cabbage
leaves with the mixture. Roll any leftover meat into meatballs. If the finely cut cabbage is too sour, rinse it, otherwise, it is not necessary. If the strands are too long, cut them in a few strokes into shorter pieces. Combine the remaining spices and the Red Gold, and add 1/3 of it to the onion-bacon base. Soak and rinse the smoked ribs, cut them into individual pieces, and place them on top. Cover with
1/3 of the cabbage, put the stuffed leaves all around. Cover with the remaining cabbage. Pour about 1/4 qt/lt water over everything, cover, and cook over low heat for about 2 hours. Shake
the pot a few times in the interim, and look to see how much juice the cabbage has. If necessary, add a
little water. About 20 minutes before it is ready, add the sausage. When cooked, remove the latter, cut in
half lengthwise and make frequent incisions on its top, rounded side. Take the 4 boned chops, pound
them flat, salt them, and dredge in flour. Brown in hot oil in a skillet about 2 minutes on each side. Drip
them off, place on a plate, and keep warm, covered. In the fat remaining from the browning, fry the sausage and the „cock’s comb” until rosy. To
serve, place stuffed cabbages on a plate and lean the fried ribs against them. Top with the sausage and
cock’s comb,” dipped in paprika. Garnish with sour cream.

Cabbage a la Kolozsvár is first mentioned in a cookbook that appeared in the middle of the 17th century at the court of the Zrinyi’s. The exact recipe reads, „I will start with the meat and cabbage, in the same manner as on the crest of Hungary and Croatia” – but the reference to Kolozsvár does not appear here yet. Miklós Tótfalusi Kis, at the end of
the century (1695) already called it Kolozsvári (Cabbage al la Kolozsvár) and used a fat hen or goose in its preparation. There is no dish called
„stuffed cabbage” in the Zrinyi cookbook but his cook nonetheless prepared a dish similar to it, albeit
without meat („Cabbage Cooked with Millet). He boiled the millet in cold water, added salt and pepper, stuffed it into cabbage leaves and cooked it in water with butter and sautéed onions. In Tótfalusi’s recipe meat appears and the dish is already called stuffed cabbage, however, grain (millet or rice) are absent from the stuffing.
He seasoned cut up beef with bacon, salt, pepper, and ginger, stuffed it into cabbage leaves and cooked it together with finely cut salted cabbage. Once the dish was cooked, he added wine and sprinkled it with pepper. One of the most unusual
recipes for Stuffed Cabbage a la Kolozsvár comes from the mid 19th century, from Mrs. Déry, nee Róza
Széppataki, the actress famous for her soubrette roles in the era of touring theater companies. It was not only the actress’ favorite dish but she herself
cooked it often and claimed that it was really only possible to prepare it well during pig-killing season.
In her version, the bottom of the pan or cauldron is completely lined with bacon rind, and the stuffed cabbages are placed over it (similar to the way
we prepare it today). On top of this come sausages, bacon, and slices of meat, and another layer of stuffed cabbage. In the process of layering also hide a larded capon or goose in it. Finally, pour some water over it, cover with bacon, and it is ready to be cooked.