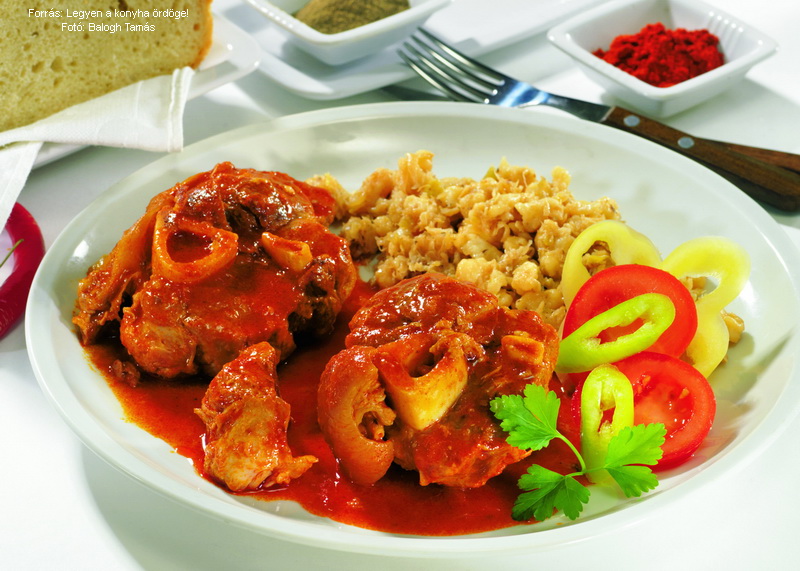 This dish requires the ham hocks to be prepared in a particular way. Once you have selected the specimen most appealing to you, longish rather than plump, ask the butcher to slice them up into about 2”-2 1/2” widths just as they are, that is, with the bone included. If you see him reaching for the cleaver it is not because he may be annoyed with you but because he may think of slicing them with that in mind. If so, talk him out of it because it would result in rough-hewn workmanship and create many bone slivers in the meat. He needs to use a bone saw, as when he is preparing ham hocks for use in making aspic. Preparing the shoulder is far more simple,
merely dice into 1”-1 1/2” cubes and it’s ready to go. Peel the onions and chop them fine. Heat up the oil in a large pan and wilt the onions in it. Place the sliced ham hock rounds and diced shoulder into it and brown them until white, stirring occasionally. Dust with paprika, stir, and pour enough water over it to cover. Add pepper, salt, and season with the bay leaves, crushed garlic paste or garlic cream and paprika cream. Cook-stew the meat on low for about 2 hours, replacing any water that may have evaporated in the process. It is ready when the ham hocks, soft as butter, fall off the meat and the juices are as thick as the best pörkölt gravy. There is plenty of time to prepare the side dish while the meat is cooking. Place the flour for the dumplings into a large bowl, add the salt and eggs. Stir in about 2 cup/ 4 1/2 dl water such that the dough is neither too soft nor too hard, but you needn’t overwork it. Bring some slightly salted water to a boil in a pot and using a small teaspoon, cut bite-sized
bits of dough into the boiling water, dipping the spoon beforehand to prevent sticking. When the dumplings have risen to the top, drain and rinse with cold water. Clean the cabbage, cut out the core and grate. Salt it and let it rest for half an hour, then squeeze out the juice. Heat up the oil in a pan, toss in the cabbage and brown, stirring. Add pepper, cover, and stew until tender, about 20 minutes. When done, add a bit more salt, stir in the dumplings. Serve so the slices of ham hock accompany the diced meat and juices, and heap the dumplings alongside.

*Pörkölt is a method of preparing meats, similar to a dry stew, and is one of the pillars of Hungarian cooking.