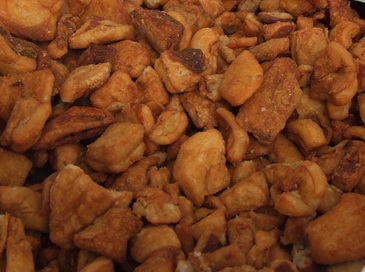 Traditionally made at pig-sticking. Remove the skin of the bacon. Cut the bacon into even, 1” cubes, put into large pan or cauldron. For every pound of bacon add 1 1/2 oz of water (in some regions of Hungary milk is used). Without the liquid, the bacon would fry too quickly, leaving the inside raw. In the liquid, however, it starts to steam and melt. Cook the bacon uncovered on low heat, stirring occasionally, until all the fat is rendered. To test, cut one cube in half and check to see if the inside is cooked through. When done, strain off liquid fat, squishing the cubes with a wooden spoon to remove all the excess fat. This ensures that the pork cracklings will be nice and crunchy. If you do not want to store, you can soften them a bit by putting them on the stove again with a bit of milk for a few minutes. More meaty pork cracklings are made using meatier bacon of the animal. Follow the same procedure for goose cracklings. Store the solidified fat refrigerated, serve it on sliced soft bread, covered with red onion rings, glue wine or hot tea for a scrumptious – and very traditional – snack.